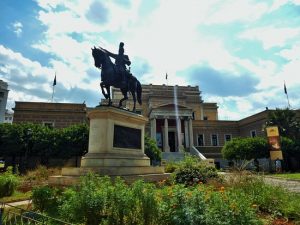 PEACEFUL PROTEST AGAINST THE NEW GREAT DESECRATION AND SAVAGERY AGAINST ROMANITY. AGAINST ORTHODOXY. AGAINST THE GREEKS. THE UNITY OF THE GREEKS IS A SUPREME OBLIGATION. THE NATIONAL SOLIDARITY. THE SOCIAL AWAKENING OF THE NATION!

No to the conversion of the Symbol of Orthodoxy into a mosque.

The decision to turn Hagia Sophia into a mosque on July 24,- the day of the signing of the Lausanne Treaty and the Turkish invasion of Cyprus-, is a challenge for Hellenism, Orthodoxy, the Christian world and the world community.

It is part of the broader strategy of aggressive movements against Greece because the Turkish expansionists know very well the symbolic value that Hagia Sophia has for all Greeks: The Parthenon and Hagia Sophia are the two symbols of our culture.

This second “Fall of the City”, as Arveler called it, comes after the “invasion” of Evros and the direct threats to our sovereign rights. In fact, it is an aggressive response to the celebrations of the two hundred years since 1821. Erdogan wants to show us that the aggressive neo-Ottoman Turkey harks back and the Greeks should “forget” the two hundred years of their independence.

Furthermore, because the Hagia Sophia is a universal symbol of Christianity as a whole, such an insolent movement is part of the transformation of the Muslim religion into a weapon of the rage of Islam and the rise of Erdogan as the new Sultan, the leader of a new jihad.

Finally, as it is a monument of a universal character, Erdogan tramples all the monuments of world culture. If the Turkish-led Islamic State destroyed Palmyra in Syria, and the Taliban destroyed Afghanistan’s Hellenistic and Buddhist monuments, Erdogan wants to desecrate a world cultural monument, ignoring the international community.

We the Greeks have received the message: if we want to remain a free nation we must respond to the Turkish aggression and make our national independence the object of a new political consensus between society, parties and the state.

And obviously, as the vast majority of the people believe this, we are not going to listen to either the sirens of submission that call us to retreat or the resurrections of the criminal Golden Dawn that wants to abuse Hagia Sophia, as in the past had flayed every patriotic mobilization.

Only a mass democratic patriotism can respond to the existential challenge facing our country.

That is why we call all Democratic patriots, beyond and above parties, to respond in every way to Erdogan’s insolent challenge.

Along with all the other mobilizations, the in preparation protest of the Church, the protests of the Greek Diaspora in the USA, all of us who are in Athens should participate in the demonstration that will take place at 7 o’clock on Friday at the statue of Kolokotronis, Stadiou Str. And let us not forget that the hand of Kolokotronis points to Hagia Sophia, calling us to be vigilant.

In the event, greetings will address:

Songs of the Fall will be sung by Christos Tsiamoulis

EVERYONE AT THE STATUE OF KOLOKOTRONIS, FRIDAY JULY 24 7pm

Citizens’ Initiative against the Conversion of Hagia Sophia into a Mosque